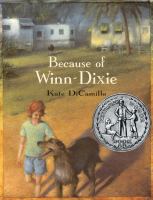 “You haven’t read Because of Winn-Dixie?” my school teacher friend asked me [she reads it to her class]. “Sydona [my 8 year-old daughter] would love it,” she continued.

“I’ve heard of it. I should try reading it  to the girls, but Madilyn [just turned 4] might be a little young,” I replied.

Well, Because of Winn-Dixie was a hit with all three of us. A book featuring a neglected yet grinning dog named after a grocery store quickly hooks most readers. To this, add a colourful cast of characters, humour and raw emotion. I got teary a few times reading it, although the ‘Beth Cry Test’ is fairly predictable. There were some meaty topics in this book for my girls to digest: a runaway mother, a distracted father, loneliness and alcoholism were the biggies. But, as I’ve heard many times–kids can handle big topics. And they did. Don’t get me wrong, a lot of depth was lost on them, but that’s okay, because many age appropriate questions were shooting from their mouths and my eldest was showing concern and compassion for Opal, the main character (qualities I would often like to see more often!).  The theme of friendship permeates throughout novel. Opal develops a number of unlikely friendships thanks to the four-legged companion that she brought home from the Winn-Dixie instead of a box of macaroni-and-cheese, some white rice and two tomatoes. And I’ve been upset when a surprise bag of candy makes it way home from a shopping trip . . .

Because of Winn-Dixie is a heartwarming book with short chapters, which made it a perfect first novel to read aloud to my young children.  It’s received some impressive accolades; a Parent’s Choice gold award in 2000 and a Newberry honour in 2001. 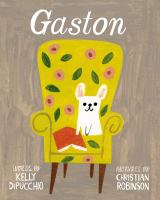 Scrumptious illustrations. Clever text. French flair. Not to mention highlighting authenticity and mixed families. This picture book is a charmer.

A springtime trip to the park reveals that a poodle and a bulldog were somehow switched at birth. They swap places and leave the park with the families that they were born into; everything looks as it should be. But the dogs and their families soon discover that looking and feeling like you’re in the right place are two very different things. The ending leaves the reader with a warm glow, for Gaston and Antoinette, the bulldog and poodle involved in the mix-up, breed puppies of their own, who are encouraged to be whatever they want to be. DiPucchio has some other fantastic books – check out Zombie in Love (Athenum Books for Young Readers, 2011) for another fun read.