“Today you will be learning about the city,” Doug’s robot mother says. “Happy downloading,” says Dad-bot. Doug plugs into an electronic board and learns many number facts about his city, such as, more than 500 million pigeons live there. When a pigeon lands on his windowsill Doug hears its funny cooing sound. Hey, his download didn’t teach him that pigeons cooed! Doug can’t help himself; he does something he has never done before–he unplugs. Doug flies out of the window to explore the city and makes many new discoveries, like taxis stop if you raise your hand and some garbage cans are smelly. Then a boy at the park asks him to play. Play? Playing is a new thing for Doug, but he is quickly learns how.

Without a hint of preaching, this picture book subtly communicates the positive power of play-based learning and the joyful discoveries that come when one ‘unplugs’. 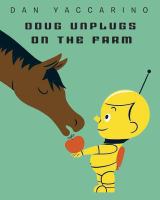