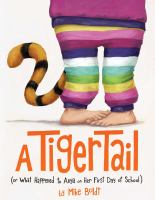 A Tiger Tail (Or What Happened to Anya on Her First Day of School) (Mike Boldt; Simon & Schuster Books for Young Children, 2016)

This picture book is a fitting theme for this month, as my youngest daughter just started kindergarten. It’s going . . . ok. She tells me that she cries a little bit every day. She also brought home lice the second week. She has not, however, grown a tiger tail, as Anya, the main character in A Tiger Tail, spontaneously does the night before her first day of school. Anya tries every way imaginable to remove or hide the tail, all to no avail. Mom tells Anya to calm down or she’ll make herself sick, and later, to hurry up or she’ll miss the bus. Anya thinks that these are both good ideas, but her parents catch on to her desire to stay home. Eventually Anya arrives at school, and discovers that her tiger tail pales in comparison to the mannerisms and physical qualities of her classmates. I particularly like the little fellow with his finger lodged up his nose and teacher’s beaver teeth. Mike Boldt’s illustrations are playful and his drawings of people fantastic. A Tiger Tail ranks at the top of its class for back-to-school reading, but will entertain all year long. Check out the other picture books written and/or illustrated by this Canadian who is making a name for himself in the picture book industry.